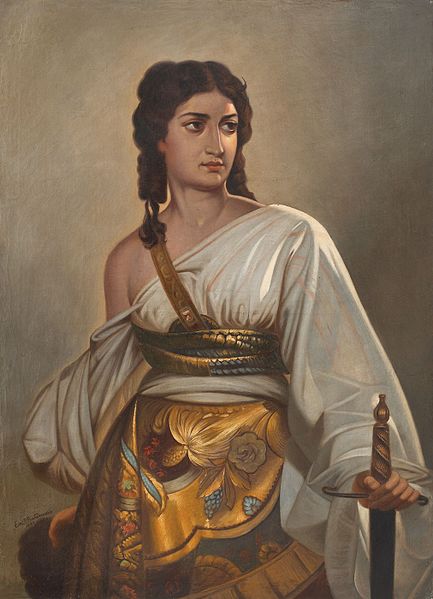 Judith is the English, French, and German form of the Hebrew name Yehudit, which means “woman from Judea.” Many people are familiar with the apocryphal account of Judith cutting off the head of enemy commander Holofernes during the Maccabeean revolt against the Seleucids. Since she made Holofernes thirsty from feeding him too much dairy, it’s thus become a Chanukah custom to eat dairy foods.

Judith’s beheading of Holofernes has been painted many times throughout history, perhaps most notably by Renaissance artist Artemisia Gentileschi, who also created a number of other paintings of Judith. In her famous Judith Slaying Holofernes, she painted Judith as herself and Holofernes as Agostino Tassi, a friend of her father’s who was mentoring her until he raped her. Very unusually for the time period, Artemisia brought her rapist to court. In 1612, he was convicted, though the verdict was sadly annulled a year later.

Judith appears in Canto XXXII of Paradiso, seated below the Virgin Mary with Beatrice and other righteous women. It seems kind of odd to have several Jewish women seated in Paradise when Medieval Catholic doctrine stated non-Christians couldn’t come to Paradise.

Emperor Justinian I of the Byzantine Empire is mentioned in Canto VI of Purgatorio, and appears in Canto VI of Paradiso, in the Second Sphere, where he discusses the history of the Roman Empire. In Justinian, Dante saw an Imperial and legal link with Ancient Rome.

Justinian ruled from 527–65, and worked hard on reviving his empire’s greatness and reconquering the Western Roman Empire. Though he didn’t completely succeed, he did get part of the Western Roman Empire back. Under his watch, many other lands were also added to the empire or reconquered. In addition to conquering lands, Justinian also created the Corpus Juris Civilis, which remains the basis of civil law in many places.

Justinian was also a devoted patron of architecture, and was responsible for the building and rebuilding of many churches, most notably Hagia Sofia in Istanbul.

One thought on “Judith and Justinian”