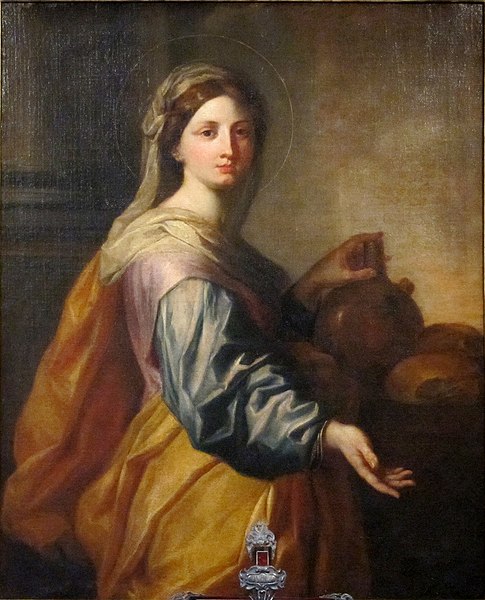 Santa Zita is mentioned in Canto XXI of Inferno, though of course not as a resident of Hell. Since she lived in Tuscany, I can only imagine Dante venerated her as much as just about everyone else.

Zita was born in the village of Monsagrati in Tuscany, near Lucca, and became a servant in the Fatinelli home at age twelve. She wasn’t treated very nicely, by either her masters or fellow servants, but she continued to keep a cheerful countenance and kind heart. Eventually, she became head of all the home’s affairs, and her uninterrupted piety moved the Fatinellis to become religious. She viewed her terrible treatment as penance assigned by God. By the time of her death, the Fatinellis almost worshipped her.

About 150 miracles were attributed to her, and she was discovered to be an incorruptible when she was exhumed in 1580. In 1696, she was canonized. The people of Lucca loved her, and a popular cult grew up around her. Eventually, other parts of Europe began venerating her too.

The Zeno who appears in The Divine Comedy (Canto IV, Inferno) is Zeno of Citium, not Zeno of Elea. This Zeno appears among the righteous non-Christians stuck in Limbo, and founded the Stoic school made famous by Seneca. He formulated his philosophy while studying with Crates of Thebes, a Cynic, and also studied with several Platonists and Megarians.

Zeno hailed from Cyprus, and was probably of Phoenician descent. Starting about 300 BCE, he taught in Athens. Initially, his followers were called Zenonians, but eventually came to be called Stoics, after the Stoa Poikile (Painted Porch), where Zeno taught. Many people admired him, among them frequent visitor King Antigonus II Gonatas of Macedonia. Zeno was offered Athenian citizenship, but he declined it out of loyalty to his homeland.

Zeno is the Latin form of the Greek name Zenon, which in turn derives from Zeus. The name Zeus is related to Dyeus, the name of an old Indo–European god, which probably means “sky” or “shine.”

2 thoughts on “Zita and Zeno”