This year, my A to Z theme on my secondary blog is names from Greek mythology. Since the Greek alphabet doesn’t have certain letters, I’ve featured names from other cultures’ mythologies on those days.

Ariadne was the daughter of King Minos and Queen Pasiphaë of Crete, granddaughter of Zeus and Europa, and niece of Circe. Minos put her in charge of his famous Labyrinth (build by Daedalus), where reparation sacrifices were made to either Athena or Poseidon. At the center of the Labyrinth was the Minotaur, with the body of a man and the head of a bull. He was the result of bestiality between Pasiphaë and a bull Minos had refused to sacrifice to Poseidon.

According to one version, Minos attacked Athens after his son Androgeos was killed fighting a bull in Marathon. Androgeos had been sent to fight this bull as a result of winning the Panathenaeic Games. After a number of adventures and interventions from Zeus, Minos asked the Athenians to send seven boys and seven girls to Crete for sacrifice to the Minotaur every nine or seven years.

One year, Prince Theseus, son of King Aegeus, took the place of one of the intended victims, with the intent to slay the Minotaur and end this slaughter. He left in a boat with a black sail, promising his father he’d return with a white sail if he succeeded. 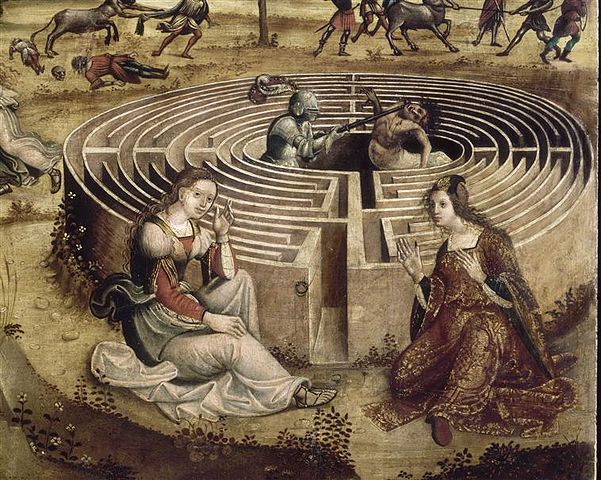 When Ariadne saw Theseus, she fell in instalove, and helped him to escape the Labyrinth by giving him a ball of thread and a sword. Theseus promised to leave with her if he succeeded. Once inside, he followed Ariadne’s instructions from architect Daedalus, to tie the string to the doorpost, and to keep going forward, never left or right.

Theseus got to the center of the Labyrinth and killed the Minotaur, then found his way out by following the string. He escaped with all the other Athenians, as well as Ariadne and her little sister Phaedra. However, on instructions from Athena, he set sail without Ariadne, and she was heartbroken. Sadly, Theseus forgot to replace his black sail with a white one, and his father committed suicide from grief.

The god Dionysus saw Ariadne weeping, and married her out of pity. In other versions, Dionysus, not Athena, was the one who demanded Theseus abandon Ariadne. She either was killed by Perseus at Argos, or hanged herself. 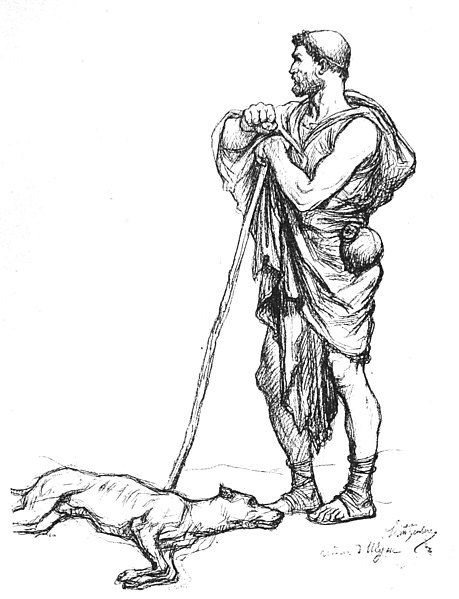 Argos was the famously loyal dog of the great hero Odysseus, waiting twenty long years for his master to finally come home. Since Odysseus’s home has been overtaken by persistent suitors trying to marry Penelope, he disguises himself as a beggar and only tells his son Telemachus of his true identity.

As Odysseus draws near his home, he sees Argos lying on a heap of cow dung, ignored and neglected. He’s a far sight from the young, healthy dog Odysseus left behind. Argos was known for his tracking skills, strength, and speed.

Argos recognises his old master immediately. He drops his ears and wags his tail, but isn’t strong enough to stand up. Odysseus can’t greet him without ruining his disguise, but he sheds a tear as he passes Argos. Shortly after he enters the house, Argos dies, having lived long enough to see his old friend again.

6 thoughts on “Ariadne and Argos”