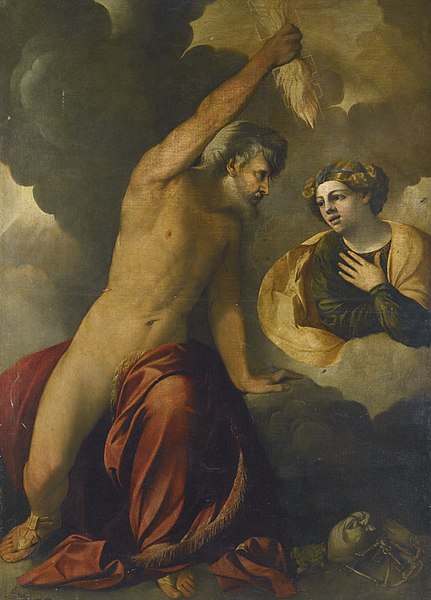 Semele is the mortal mother of the god Dionysus, and the daughter of heroic Theban founder Kadmos (Cadmus) and his wife Harmonia. Her Roman name is Stimula.

Semele was a priestess of Zeus, and Zeus liked what he saw when he watched her slaughtering a bull by his altar and swimming in the river Asopos to clean off the blood. He flew over the river, disguised as an eagle, and fell in instalove yet again. Zeus, being Zeus, couldn’t keep it in his pants, and began an affair with Semele.

Hera, being Hera, was extremely pissed when she discovered the affair and that Semele was pregnant. She took on the guise of an old crone and befriended Semele, who admitted she’d been sleeping with Zeus. Hera pretended she didn’t believe Semele, and planted seeds of doubt in Semele’s mind.

Semele asked Zeus to grant her a boon, and Zeus was only too eager to comply. He promised by the River Styx to grant her whatever she asked for. Semele asked him to reveal himself in all his glory to prove his divinity. This request didn’t go over so well, but Semele persisted, and Zeus had no choice but to do it.

Jupiter and Semele, by Gustave Moreau

He tried to spare her life by only showing her his smallest thunderbolts and thinnest thunderstorm clouds, but it’s impossible for mortals to look upon deities without burning up. Semele was consumed by lightning-created flames.

Zeus rescued the fetal Dionysus by sewing him into his thigh. When Dionysus grew up, he rescued Semele from Hades and made her a goddess on Mount Olympus, with the name Thyone. She presided over her son’s wine-induced frenzies.

Semele may be of Thraco–Phyrigian origin, derived from the Proto–Indo–European root dgem, “earth.” It thus may be borrowed from the Thracian name Zemele, which means “mother earth.” However, this etymology is impossible to definitively establish after so many millennia.

The Train of Silenus, in the style of Peter Paul Rubens

Silenus (Seilenos) is the usually-drunk tutor and companion of Dionysus. He’s usually depicted as older than the other satyrs, sometimes significantly older. Originally, he was cast as a forest man with horse ears, sometimes also a horse tail and legs. Later on, he often began to be depicted as fat, bald, human-legged, thick-lipped, and squat-nosed.

Silenus is often so drunk, he has to be supported by other satyrs or carried by a donkey. Though he’s the drunkest of the satyrs, he’s also the wisest. When drunk, he possesses the gift of prophecy. King Midas of Phrygia took advantage of this, and spiked a fountain Silenus often drank from. When Silenus fell asleep, servants took him to the palace.

When Midas asked for some wisdom, Silenus replied, “The best thing for a man is not to be born, and if already born, to die as soon as possible.” This is very similar to the pessimistic musings of King Kohelet in the Book of Ecclesiastes.

In another version, Silenus was found wandering in the forest, rescued by peasants, and taken to Midas. The King showered him with xenia (hospitality), and Silenus told him stories in exchange. Midas loved the stories so much, he kept Silenus as a guest for five days and nights. Dionysus offered Midas a reward for his xenia, and Midas famously asked everything he touched to be turned into gold.

Silenus is of unknown etymology, though it could be related to the Thracian word zilai (wine).

4 thoughts on “Semele and Silenus”