Ing was a Germanic god, whose name derives from the Proto-Germanic *Ingwaz. It possibly means “ancestor.” He was a fertility god and the legendary ancestor of the Ingvaeone people (historically, erroneously called the Ingaevones). This West Germanic tribe lived along the coast of the North Sea, in areas which are part of modern-day Denmark, Germany, and The Netherlands.

He appears widely in Old Norse mythology, particularly in stories in which he falls in love with Gerðr, a jötunn (an ambiguously-described type of figure). 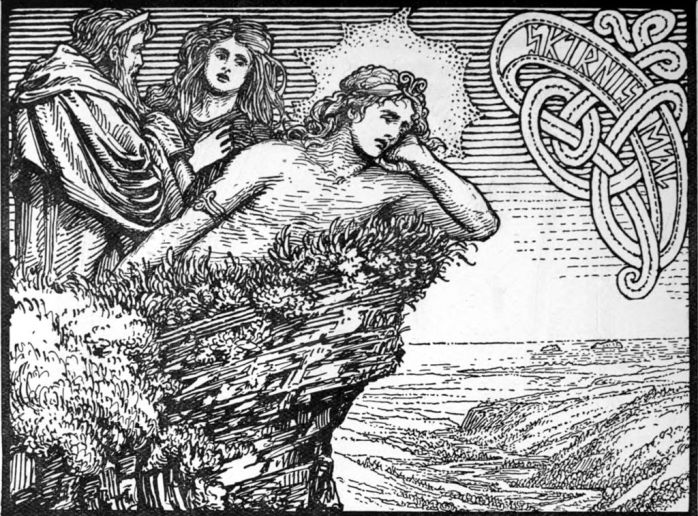 In the modern era, Ing has lent his godly etymological root to many names, among them:

Ingibjörn means “Ing’s bear” in Icelandic and Swedish, from the Old Norse root Ingibjǫrn. The Norwegian form is Ingebjørn.

Ingimar is the Icelandic form of Ingemar.

Ingmar is a variation of Ingemar.

Ingmars is the Latvian form of Ingemar.

Ingolf means “Ing’s wolf” or “wolf of Ing” in German and the Scandinavian languages. It derives from the Old Norse Ingólfr and the Old Germanic Ingulf.

Ingomar is a rare German name, a form of Ingemar.

Ingvar means “warrior Ing” or “Ing’s warrior” in Icelandic, Swedish, Danish, and Norwegian. It derives from the Old Norse Yngvarr.

Ingvars is the Latvian form of Ingvar.

Yngve is Danish, Norwegian, and Swedish.

Inga is Scandinavian, Icelandic, Russian, Latvian, German, and Lithuanian. In German, Scandinavian, and Icelandic names, this can be a nickname for more elaborate Ing- names as well as a name in its own right.

Inge is a nickname form in German, Danish, and Dutch, with the Greenlandic variation Ínge. This spelling is traditionally male-only in Swedish and Norwegian.

Ingebjørg means “Ing saves/rescues/helps” in Danish and Norwegian. It derives from the Old Norse Ingibjörg.

Ingeborg is the German and Swedish form of Ingebjørg, as well as an alternate Danish and Norwegian form.

Ingeburg is a rare German form of Ingeborg.

Ingegärd means “Ing’s enclosure” in Swedish. It derives from the Old Norse Ingigerðr.

Ingegerd is the Danish and Norwegian form of Ingegärd, and an alternate Swedish form.

Ingegjerd is a Norwegian variation of Ingegerd.

Ingibjörg is the Icelandic form of Ingeborg. The Faroese form is Ingibjørg.

Ingfrid is a Norwegian variant of Ingrid.

Ingfrida is another Norwegian variation.

Inghild means “Ing’s battle” in the Scandinavian languages. The Old Norse roots are Yngvildr and Ingvildr.

Îngile is the Greenlandic form of Ingrid.

Íngipôĸ is the Greenlandic form of Ingeborg.

Ingka is the Greenlandic form of Inga.

Ingrid means “Ing is beautiful” in German and the Scandinavian languages. It derives from the Old Norse Ingríðr.

Ingvild is a Norwegian variation of Inghild.

Inka is the Frisian and Finnish form of Inga/Inge, and an alternate German form.