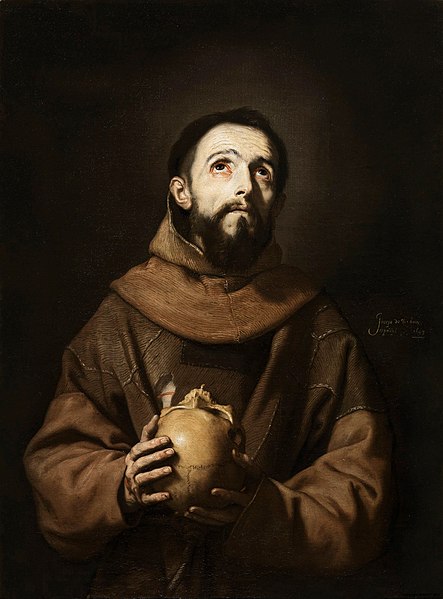 Francis is the English and French form of the Latin Franciscus (Frenchman), which ultimately derives from the Germanic tribe the Franks. They were named for a kind of spear they used. The name became popular in Christian Europe because of the abovepictured St. Francis of Assisi (né Giovanni). His Francophile father nicknamed him Francesco.

St. Francis renounced his dad’s wealth and devoted his life to serving the poor and downtrodden. He also founded the Franciscan order. Because of his popularity and how beloved he was, the name became widespread in continental Western Europe in the Middle Ages. It was only in the 16th century that it became common in Britain, however.

The name was #50 when the U.S. began tracking name popularity in 1880, and stayed in the Top 100 till 1955. Its top rank was #29 in 1915. Though Frances is well-established for females, Francis was fairly common for girls during this same time.

2. Frans is Dutch, Finnish, and Scandinavian.

4. Francisco is Spanish, Portuguese, and Galician.

9. František is Czech and Slovak.

11. Patxi is another Basque form.

12. Franjo is Slovenian, Serbian, and Croatian. I’m told it’s rather rare in Serbia nowadays, and that Franja is more common, albeit just as rare.

31. Frantsisk is Russian and Bulgarian.

33. Porinju is Malayalam, an Indian language.

35. Pranchi is another Malayalam form, used in central Kerala.

1. Francesca is Italian and Catalan.

2. Francisca is Spanish and Portuguese.

3. Franciska is Hungarian. Nicknames include Franci and Fanni. The alternate form Frančiška is Slovenian, with the nickname Francka.

11. Francine is English and French.

12. Fragkiska is a rare Greek form.

14. Franziska is German, and the name of the most infamous royal pretender of all time, Franziska Schanzkowska. I’m stunned there are still Anastasians convinced she was who she claimed to be! Countless DNA tests from multiple labs and countries, and a wealth of other damning evidence, have exposed the truth once and for all!

16. Fransiska is Scandinavian and Icelandic.

20. Francheska is Russian and Bulgarian.

24. Pantxika is Basque and Occitan.

3 thoughts on “All about the name Francis”