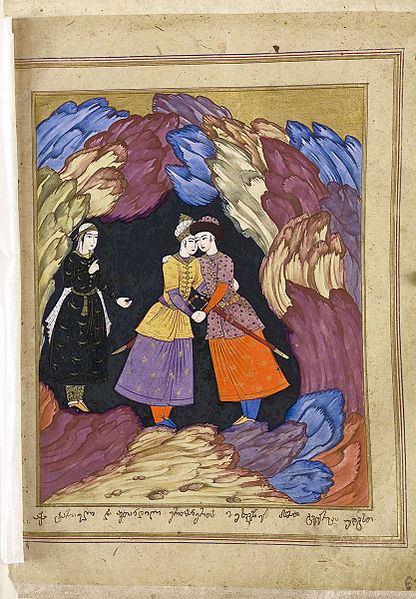 18th century miniature of Tariel and Avtandil meeting in a cave

Aminta was coined by Italian poet Torquato Tasso for his 1573 play of the same name. It’s derived from Greek name Amyntas, from amyntor (defender).

Amiran is the hero of Medieval Georgian poet Moses of Khoni’s great romance epic Amiran-Darejaniani. The name is derived from mythical Georgian hero Amirani, of unknown etymology. I have a character by this name, who breaks out of prison after four years of Soviet torture and walks all the way into Iran, over the Alborz Mountains, to find his wife Alina.

Avtandil is another Georgian name, created by Shota Rustaveli for his 12th century national epic The Knight in the Panther’s Skin. It’s derived from Persian roots aftab (sunshine) and dil (heart).

Bayard is a magical bay horse owned by Renaud de Montauban and his brothers in Medieval French poetry. It derives from Old French baiart (bay-coloured).

Caspian is a character in C.S. Lewis’s famous Chronicles of Narnia series. Caspian, who débuts in the fourth book, is Narnia’s rightful king who’s been forced into exile by his evil Uncle Miraz. The name probably comes from that of the Caspian Sea, which in turn derives from the city of Qazvin, Iran, named for the ancient Kaspian tribe.

Cedric was created by Sir Walter Scott for a character in his 1819 novel Ivanhoe. He based it on Cerdic, the first historically-verified King of Wessex (and my 48-greats-grandfather). The name is possibly connected to Brythonic name Caratacos, which comes from Celtic root car (love).

Cymbeline is the title character of a 1609 Shakespeare play about a mythological king based on Cunobelinus, a British chieftain who’s said to have ruled in the first century of the Common Era. It may mean “hound of Belenus,” from Old Celtic root koun (hound) and Belenus, a Gaulish god of the Sun often equated with Apollo. Belenus may mean “bright, brilliant” in Old Celtic.

Cyrano is famous as the title character of French writer Edmond Rostand’s 1897 play Cyrano de Bergerac. The name may come from Cyrene, the Latinized name of Ancient Greek city Kyrene (now in Libya), which was named after Queen Kyrene of Thessaly. It ultimately means “sovereign queen.” Rostand’s character is based on a real person, 17th century satirist Savinien Cyrano de Bergerac.

Dorian was created by Oscar Wilde for his 1891 novel The Picture of Dorian Gray, derived either from Ancient Greek tribe the Dorians or Irish surname Doran (descendant of Deoradhán). The name Deoradhán in turn means “wanderer, exile.”

Ebenezer means “stone of help” in Hebrew. This is used as a place name in the Bible, but most famously used as a person’s name in Charles Dickens’s 1843 novel A Christmas Carol. This is also the real name of next-oldest child Ben Pepper in Margaret Sidney’s Five Little Peppers series. Ms. Sidney used a lot of strange or pretentious names. 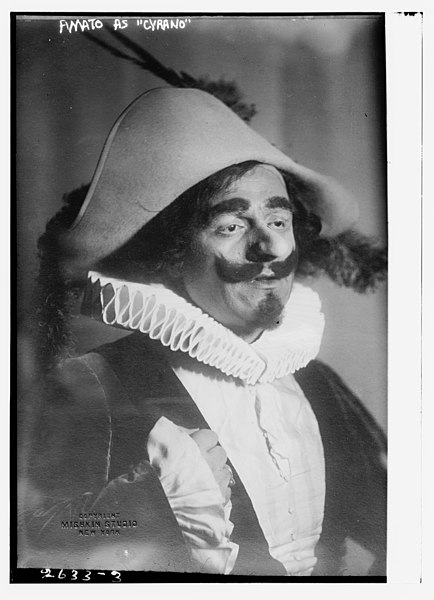 Etzel is a character in the great Medieval German saga Die Nibelungenlied. It’s a form of Attila, as Etzel is a fictionalised version of Attila the Hun. The name may mean “little father,” from Gothic root atta (father) and a diminutive suffix.

Figaro was created by French playwright Pierre-Augustin Caron de Beaumarchais for the protagonist of his plays The Barber of Seville (1775), The Marriage of Figaro (1784), and The Guilty Mother (1792). The name may be derived from the French phrase fils Caron, son of Caron (the playwright’s nickname).

Florimond is the name of the prince in some versions of Sleeping Beauty. It possibly derives from Latin florens (flourishing, prosperous) and Ancient Germanic mund (protection).

One thought on “Male names of literary origin, A-F”