Today, 18 January, is the 68th Jahrzeit (death anniversary) of the great comedian Curly Howard, né Jerome Lester Horwitz. I had a post about the name Jerome three years ago, so now it’s time for Curly’s adopted surname to shine. There’s really not much to say about his middle name Lester.

The English name Howard started its life as a surname, and eventually became a forename as well. There are at least four known etymologies:

Hovard is a rare Swedish and German form, and Jovardo is a rare Spanish form. 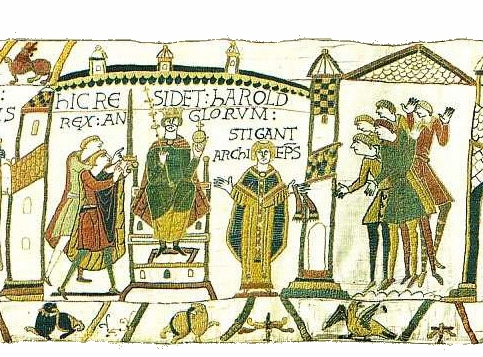 The English name Harold derives from Old English Hereweald, and the roots here (army) and weald (ruler, power, leader). After the Norman invasion and occupation of England, Harold fell into general disuse, and was only revived in the 19th century.

The Ancient Germanic form Hariwald, or Chariovalda, dates back even earlier, to the first century of the Common Era. Another early, related form is Arioald. This name comes from Proto–Germanic *harja-waldaz, which has roughly the same meaning as Hereweald.

Haraldr, the Old Norse form, was also a common name during these long-ago centuries, in both Scandinavia itself and among many settlers in the Danelaw (Danish-dominated part of England).

Though many deride Harold as a geriatric, outdated name, I’ve always found it sweet and charming. It seems like the name of a serious, studious fellow. On a personal level, I’ve become even fonder of it since discovering the great comedian Harold Lloyd (1893–1971), one of the Big Three comics of the silent era.

Harold is one of my heroes because he was a fellow burn survivor, and resolved to become an even stronger performer after almost dying in a 1919 accident with a prop bomb. Many people would’ve given up and retreated from acting altogether, but Harold didn’t let the loss of two fingers, temporary blindness, and a long, touch-and-go hospital stay keep him from his life’s calling.

Other forms of Harold include:

1. Harald is Scandinavian and German, and has been borne by three kings of Denmark, five kings of Norway (including the current king), and three earls of Orkney.

3. Haroldo is Spanish and Portuguese.

4. Harri is Finnish and Welsh.

6. Aroldos is a rare Greek form.

9. Harolyn is a rare, English feminine form. I’m not really a fan of this name!

Alfred is an English, French, German, Scandinavian, Dutch, Polish, Estonian, Slovenian, Finnish, Catalan, Georgian, Armenian, Bulgarian, Romanian, Russian, and Serbian name derived from the original Old English Ælfræd (elf counsel). Its roots are ælf (elf) and ræd (counsel). Though many Anglo–Saxon names fell out of use after the Norman invasion and occupation, Alfred stayed popular thanks to my amazing ancestor Alfred the Great, a fellow scholar and person of letters.

The variation Alfréd is Slovak, Czech, and Hungarian, and Alfreð is Icelandic. Other forms of Alfred include:

7. Alfried is a Dutch and German variation.

9. Elfried is an alternate German and Dutch form.

10. Alfredu is Asturian and Sicilian.

2. Alfrédie is a rare Norman form.

4. Alfredine is a rare French and English form.

5. Alverdine was occasionally used in English in the 19th century.

6. Alvedine is the 20th century form of the uncommon Alverdine.

Waleran (English, Flemish, French): Derived from Ancient Germanic name Walderam, with Gothic roots valdan (to reign) and hraban or hramn (raven). In the case of the English name, it may also be a form of Valerian (to be strong), from Latin root valere.

Waste (Swedish): Nickname for names ending in -vast (firmly, fast), from Old Norse root fast. Obviously a name to be avoided in the Anglophone world!

Witoslav (Czech): “To rule in glory,” from roots wit and slava.

Wrath (English): Referred to the wrath of God.

Edward, used in English and Polish (albeit with differing pronunciations), comes from the Old English elements ead (fortune, wealth) and weard (guard). It loosely translates as “rich guard.” Several Anglo–Saxon kings bore this name, the last of whom was Edward the Confessor.

Thanks to Edward the Confessor’s popularity, the English people kept using his name even under Norman occupation. It’s remained popular not only in England, but throughout Europe as well (under various forms).

Other forms of Edward include:

2. Eduardo is Spanish and Portuguese.

3. Edvard is Czech, Scandinavian, Slovenian, Finnish, Armenian, and modern Russian. The variant form Edvárd is Hungarian. Edi is a nickname form in several of these languages.

18. Eduarda is a Portuguese feminine form.

Edmund, an English, German, and Polish name, comes from the Old English ead (fortune, wealth) and mund (protection). Like Edward, it too remained in use under the Norman occupation, due to the popularity of King Edmund I (922–946).

Other forms of Edmund include:

1. Edmond is French. The nickname is Edmé.

4. Edmao is Limburgish. The nickname is Mao.

5. Ödön is Hungarian. The nickname is Ödi.

6. Éamonn is Irish. Variant forms are Éamon and Eamon.

10. Edmonde is a French feminine form. The nickname is Edmée.

11. Edmonda is an Italian feminine form.

12. Edmunda is a Spanish, Portuguese, Dutch, and German feminine form.

Edgar, an English, French, Estonian, Portuguese, and Spanish name, comes from the Old English ead (fortune, wealth) and gar (spear). It was borne by King Edgar the Peaceful of England (ca. 943–8 July 975), but fell into disuse after the Norman occupation.

The name came back into widespread usage in the 18th century, and enjoyed an additional boost thanks to a character in Sir Walter Scott’s 1819 novel The Bride of Lammermoor. It was in the Top 100 in the U.S. from 1880–1925, and gradually went up and down over the ensuing decades. As of 2016, it was #342.

Other forms of Edgar include:

1. Edgardo is Italian and Spanish.

5. Edgeir is a rare Norwegian form.