Since no one in Greek mythology has a name starting with V, either in the original Greek or in one of the Latinized forms historically used, I decided to use Roman mythology for the V day. My original plan had been to use Roman names for the letters missing from Greek, but there are also certain letters not used in Latin.

I also couldn’t find much substantial information on any of the Roman V deities I tracked down, so I decided to feature a bunch of stubs today. Because I’m very superstitious about lucky vs. unlucky numbers and dates, I had to make it nine instead of leaving it at eight. As irrational as I know this is, I always try to avoid the number eight! 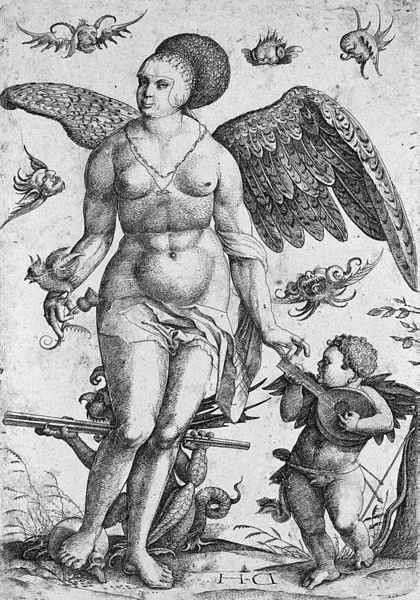 Vervactor is one of the twelve helper gods of the goddess Ceres, overseeing each step of the grain cycle. He’s the first one up, the god who plows. A priest would invoke the help of these twelve gods, asking for Divine help and protection every step of the way. Vervactor derives from vervago, “to break up,” and vervactum, “fallow ground.”

Viduus is the god who separates the body and soul after Death. The name means “void, bereft,” and is the source of the English words “widow” and “widower.” Interestingly, “widower” is one of the few words whose masculine form is piggybacked off the original feminine form, not the other way around (e.g., actor vs. actress, usher vs. usherette). While I normally avoid using suffixes denoting sex, “widower” is one of those words which still seems to require it.

Viriplaca is the goddess who soothes men’s anger. This was used as one of Juno’s added names, when she was invoked as a goddess to restore peace between a married couple. There was a sanctuary to her on Palatine Hill in Rome, where women went to pour out their hearts when their husbands had wronged them. Viriplaca derives from vir, “man,” and placare, “to appease.”

Verminus is the god who protects cattle from disease, and is possibly taken from the Indigetes, a conquered Iberian people. There were several altars to him in the Roman Empire. His name either derives from vermine, “gripe,” or vermino, “to have worms.” Related words include vermis (worm) and verminosus (wormy). You can guess where the English word “worm” came from!

Venilia is a goddess of the winds and sea, though according to Ovid and Virgil, she was a nymph and the wife of Janus or Faunus. A mountain on Venus is named for her. The name might be related to ventosus, “windy.”

Vagitanus (or Vaticanus) is the goddess who presides over a baby’s first cry and opens their mouths for this purpose. The name derives from vagitus, “crying, wailing, squalling.”

Vitumnus is the god who enables the quickening (the first fetal movements in utero). Some sources believe this is an aspect of Jove (Jupiter) instead of a separate deity. The name derives from vita, “life.”

Volutina is the goddess who causes envelopes (i.e., leaf sheaves) to form. The name is derived from involumenta, “swaddling,” and voluto, “to roll.”