The Quirinus section of this post is edited from last year’s A to Z post, since it’s hard to find significant deities whose names start with Q. Quetzalcoatl was out of the question, since my intent was to focus on deities who aren’t super-well-known.

Quiritis is a Sabine goddess of motherhood, often associated with protection. I can imagine many a woman praying to her in the throes of childbirth, or for help and guidance with learning how to be a mother.

Quiritis is believed to be derived from the Sabine word quiris (spear, lance). She’s often depicted holding that weapon, presumably to defend someone or something. Perhaps because of this, she came to be associated with Juno (Iuno), the Roman equivalent of Hera. Juno is also frequently depicted holding a spear or lance, something which came from the earlier Quiritis.

Roman marriages traditionally included a ritual wherein the bride’s hair was cut or parted by a spear. Some scholars believe this was the influence of Quiritis and Juno’s association with marriage.

Juno was frequently worshipped under the name Juno Quiritis or Juno Curitis, and Juno Quiritis is said to be the only deity worshipped by all thirty curiae (military and political divisions) established by Romulus. By Campus Martius, an area of great religious, political, and military training importance, there was a temple to Juno Quiritis. 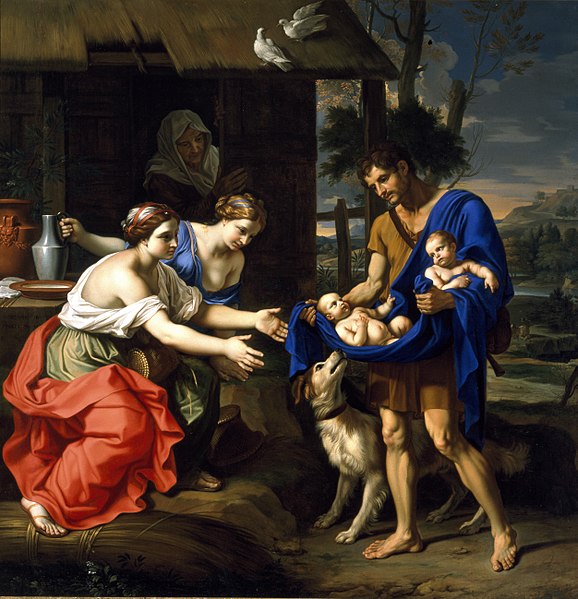 The Shepherd Faustulus Bringing Romulus and Remus to His Wife, by Nicolas Mignard, 1654

Quirinus is an alternate name for Romulus. Together with his twin brother Remus, he founded Rome. Later on, Quirinus/Romulus was elevated to deity status. Sources differ on whether the Roman god Quirinus is or isn’t one and the same as Romulus.

There are many versions of the twins’ origins, ancestry, and childhood, but all versions have a servant who can’t bring himself to murder the babies, and instead puts them in a basket on the banks of the Tiber River. The river floods and carries the twins downstream, unhurt. Tiberinus, a river god, makes the basket catch on the roots of a fig tree, and a wolf named Lupa discovers them and serves as their wetnurse. Picus, a woodpecker, feeds them.

The twins grew up as shepherds following their discovery by Faustulus, who took them to his hut and raised them with his wife Acca Larentia. The rest is history.

Quirinus came to stand for the Divine personification of the Roman people.

One thought on “Quiritis and Quirinus”